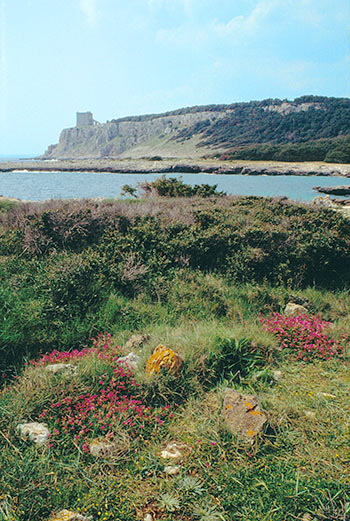 The watchtowers were used mainly to spot the Turks, who had been able to invade Otranto( in 1480 )and behead 800 people whose skeletons are still in the Otranto Cathedral.
To avoid other raids many Watchtowers were built from Taranto to Ostuni during 1500 thanks to the Court and the support of local Universities.

The four Towers of Cesarea:

• The first tower, called "Cesarea", was built in 1583 and restored after only 50 years. It is the biggest tower (Height: 16 meters-foundation 21 meters)

• The second tower is called "Chianca"(height 18 m). It is located between two creeks near Chianca isle( rock isle) and Malva isle (Mallow isle). Almost destroyed after World War II, it has been restored in the ‘70s.

• The third one is called "Lapillo"(Lapillus-height 17m). This tower is now used for workshops and conventions and it is also the location of the” Le vie del Mediterraneo” association. Nearby there is also a fresh water spring.

• The fourth tower, 2 km far from Nardò, is called “Punta Castiglione”; unfortunately it fell down. It had been built in 1583 by Leonardo Spalletta and it is highly probable that it was even taller than tower Cesarea.